So, how would you respond if a child of about nine years old, whom you had never before met, looked you straight in the eye and said in the snottiest voice possible, “Would you MOVE?!”

I was completely taken back for a second or two, as I perched on a small bench with a squirmy four year old on my lap, attempting to listen to the naturalist who was talking to a group of children about plankton. The nine year old had pushed his way past me to get closer to the naturalist, and upon deciding he no longer felt like listening, was attempting to push his way back.

Reflexively, because I parent two children in whom I am trying to instill manners, I replied, “You can’t speak to me that way. That was really rude.” From his blank look, I understood that most of the adults in his life don’t correct his rudeness. He seemed surprised that I would call out his behavior, but he was not at all ashamed of it, or even angry that I had said something. He proceed to push past me with a, “You’re in my way.”

Of course, I had my eye on this child for the remainder of the time that I was in his presence. He repeatedly disobeyed or disregarded instructions given to him by other adults, even staff members of the event we were attending. He had no respect for boundaries. And even more troubling to me, no respect for adults as authority figures.

I’m not a super-hierarchical parent. I have no trouble negotiating with my kids, taking the time to explain the “why” of my thinking to them, even modifying rules after receiving input from the kids. But it is definitely important to me that they know that they are my children, not my peers. On some matters, my word or their dad’s word is absolute.

I am even more conscious of my children’s attitude towards other adults. I want them to be a little bit scared of teachers, babysitters, their friends’ parents and other authority figures. If they are disrespectful to someone who is “their adult” for that moment, I want them to be worried about what Mom and Dad are going to have to say about that. They know what kind of polite and respectful behavior we expect from them, barring grievously out-of-line behavior from an adult.

But what do you do when the child being rude is not your own? I feel torn about it. My correcting the child is probably not going to change the child’s behavior if that message is not being reinforced at home. However, there is always the possibility that a child, especially an older child, will find a learning opportunity in a small moment like that. There have certainly been times in my own life when the judgment of a stranger really forced me to reflect on my own behavior. And if I don’t set boundaries about how I expect to be treated, I am not modeling boundary-setting and self-respect to my own children.

Either I am becoming hypersensitive to rude children or I am encountering this tricky situation more often than I would like. What gives, fellow parents? I understand being too tired to call a child on their every bratty remark, but at some point you have to realize that it is your job to teach your children some manners. It is truly in their best interest. How will they successfully navigate school, jobs, future in-laws and any other situation that requires that you deal with people who are higher up on the pecking order? Plus, common courtesy makes everyday life so much smoother. Driving. Neighborliness. Marriage.

I can’t imagine living with a child who doesn’t have basic manners. I take that back. I can imagine it, because every few months one child or the other is going through some phase that required severe boundary testing, whining, tantrums or some other nastiness. But I know it’s temporary. And by and large, it does not spill over into their interactions with other adults. I can’t imagine living with that every day. Or the stress that would accompany taking my kids out in public. The frequent parent-teacher conferences.  The complaints from coaches, troop leaders and other adults. 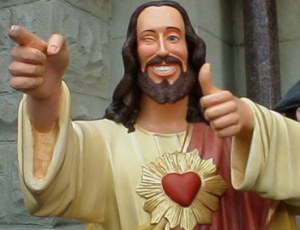 When I hear about the workplace problems that the Millennials are having, and then I witness the poor manners and lack of respect for authority among children I encounter at parks and museums, it makes me wonder what the defining characteristics of my children’s generation will be. I hope we parents aren’t known as “helicopters” or our children as” entitled.” Neither do I wish us to be like “Buddy Christ” and raise children who never learn to distinguish the subtle differences in relationship between parents, friends, coworkers, bosses and so forth. So I guess I will continue to correct the rude behavior of my children and other people’s children as they relate to me. And hope that I don’t incur the wrath of a parent who thinks I have committed a more grievous breach of propriety than their rude child.