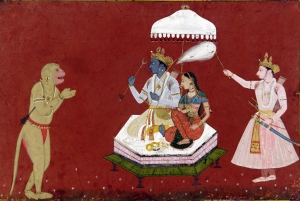 Last week, my husband and I snuck away to see ACT Theater’s adaptation of the epic Indian story, Ramayana. Ramayana tells of the heroic deeds and journey of Rama, one of the incarnations of the deity Vishnu. Rama weds a woman that he loves dearly, the princess Sita. Although Rama is much beloved by his father, he cannot succeed him as king due to a long-ago promise made by the king to one of his wives. Thus, when the old king dies, Rama, Sita and Rama’s half-brother Lakshmana go into exile, during which time Sita is tricked and taken prisoner by the demon king Ravana. A great battle ensues, with much fighting of the “good vs. evil” variety, and eventually Rama prevails, rescuing Sita. As the Stranger put it, “It’s like the Bible plus the Iliad plus the Odyssey plus Mother Goose bedtime stories wrapped up in one.”

While reading the program before the show, I was intrigued by the page spent describing why ACT decided to stage an ancient epic in modern times. They spoke of the relevance of archetypical myths to modern problems, and how examining the themes brought up in these works can shed new light on present day struggles. Since we are in the midst of divisive political times, I prepared myself to reflect on such ideas as war, the interplay between religion and government, the long shadow of deceit, and so on. And I was not disappointed. Rama waxes poetic about the devastation of war, and lives lost. It is one of several poignant soliloquys about the choices that humans make and the unintended consequences – personally and socially – of those choices.

However, what has really stayed with me is the portrayal of Sita and the cultural expectations about the woman’s “purity” that she represented. Given that Ramayana is an ancient Indian epic, I can’t say that I was surprised at the implicit misogyny – after all in parts of India widows still throw themselves on the funeral pyre when their husbands die. What surprised me was how relevant this debate over Sita’s “purity” felt, even now in the year 2012.

In the past few weeks, Republican candidate after Republican candidate has stood before crowds of people to make declarations about access to birth control, the “personhood” of zygotes created through in-vitro fertilization, and the divine blessing of conception via rape. Each successive declaration has brought me through one of the five stages of grief:

In Ramayana, poor Sita, after being abducted by the demon king, continually rejecting his advances, sending messages to Rama to let him know she is still alive, and combatting depression and hopelessness, is rescued. Delighted, she rushes to Rama’s embrace, but he scorns her. Rama has heard that his people suspect that Sita was “made impure” by contact with the demon and they do not want an impure queen. Sita despairingly reassures Rama that she is pure, and yet he refuses to believe her. To the point that she casts herself into the fire.

Of course, this being an epic story, she is so pure that even the flames cannot burn her and Rama, seeing evidence that she is telling the truth, claims her once more as his wife. And this being an ancient epic, she still wants him after the way her just treated her.

Is it much different for modern American women than it was for Sita in the world of 4th century BCE  India? Well, women’s “purity” is still important to a whole lot of people, especially the devout of most religions and Republican politicians. And even though, in the case of Sita and a great many other women, the “impurity” would be caused by RAPE, we still insist that somehow it is her fault if the rape happened. While we no longer expect women to throw themselves into the fire to prove their innocence, some do continue to insist that if a woman really is pure, divine miracles – like women’s bodies magically preventing pregnancy in case of “legitimate rape”- will show that she in an innocent. So no, not that different.

However, Sita’s story, and the fact that our thinking about women, purity and rape hasn’t evolved much in 2500 years, also makes me sad for men. Why does sex with a man make a woman unclean? Is it because he (and more importantly his semen) is unclean? How does this make men feel? How does this skew their perception of themselves, their sexuality and their relationship with women (or even worse, with other men!)? Why do we still have religions and politicians willing to tell us that our bodies and our sexuality are both a gift from God, and dirty – at the same time? It befuddles me and causes me to wonder how much of this pure/impure thinking is at the root of many of our modern social problems.

Perhaps it’s time to write an American feminist exegesis of Ramayana, in which Sita was raped by Ravana, and yet still “pure” enough to withstand the flames. The fire examined her conscience and her character, and found them to be clean. Perhaps her willingness to hold her head high and to know that in her heart she was right allowed her to transcend any pain – from fire to rape – that her body was subjected to. Perhaps she knew, after surviving all of that time with a demon king, that she could – and would – survive anything. Pure. Intact. Whole. Woman.